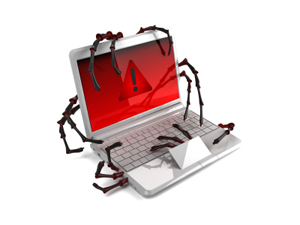 Spyware is a type of malware that can be installed on computers which collects small pieces of information about users without their knowledge. The presence of spyware is typically hidden from the user, and can be difficult to detect. Spyware programs can collect various types of personal information, such as Internet surfing habits and sites that have been visited, but can also interfere with user control of the computer in other ways, such as installing additional software and redirecting Web browser activity. Spyware is known to change computer settings, resulting in slow connection speeds, different home pages, and/or loss of Internet connection or functionality of other programs.

Malicious programmers have released a large number of rogue (fake) anti-spyware programs, and widely distributed Web banner ads now spuriously warn users that their computers have been infected with spyware, directing them to purchase programs which do not actually remove spyware—or else, may add more spyware of their own.

A computer virus is a computer program that can copy itself and infect a computer. The term “virus” is also commonly but erroneously used to refer to other types of malware, including but not limited to adware and spyware programs that do not have the reproductive ability. A true virus can spread from one computer to another (in some form of executable code) when its host is taken to the target computer; for instance because a user sent it over a network or the Internet, or carried it on a removable medium such as a floppy disk, CD, DVD, or USB drive.

A Trojan horse, or Trojan, is software that appears to perform a desirable function for the user prior to run or install, but (perhaps in addition to the expected function) steals information or harms the system.

Operations that could be performed by a hacker on a target computer system include:

Trojan horses in this way require interaction with a hacker to fulfill their purpose, though the hacker need not be the individual responsible for distributing the Trojan horse. It is possible for individual hackers to scan computers on a network using a port scanner in the hope of finding one with a malicious Trojan horse installed, which the hacker can then use to control the target computer.

As mentioned earlier on, the term “Trojan horse” was taken from a clever Greek plan described by Homer in the Iliad. After seemingly abandoning the siege of Troy, the Greeks placed armed men inside a huge wooden horse. The horse was welcomed into the city by the Trojans, who believed it was a symbol of peace; they slept while the Greeks exited the horse and opened the gates allowing the Greek army into Troy, conquering the city.

There is a new type of threat to your computer that has been dubbed “ransomware.” This type of threat encrypts your data and demands payments or up to $1000 or more in order to retrieve your information. In most cases, there is no way to retrieve your data if you have been infected by this type of malware. A thorough cleaning of you system and restore from a back up is usually the only course of action.

The Affordable Computer Guy can help!

With thousands of successful cases of spyware and virus removal, the Affordable Computer Guy can return your computer to an operable state. If you think you have been infected by spyware, DON’T WAIT to have your computer serviced by a professional or you risk letting your personal information fall into the wrong hands.